I was at a writers’ group some weeks ago. Like every other group meeting, we got in a circle, read a bunch of stuff that people have been working on, and gave critical feedback to encourage and direct each other toward success. Total cuddle in a corner, Kumbaya with sorcerers, as usual. However, the guitar strumming and s’mores came to a screeching halt in the midst of one reading. It was a classic speculative, Tolkien-fantasy. Some very classic tropes. Evil wizard. Quiet, prophetic, old war-dog. Salty barrack-men. Good stuff. But then we hit it, like a mace to the face! Sitting, plainly, in the middle of a very classic story of a wizard lord, struggling with his own powers, was a sex slave. Not just a sex slave, but the trope of all sex slaves. (Submissive, frightened, illiterate, helpless, yet yearnful and compliant of her master’s desires, however barbaric they might be.)

It was an awkward read when it got into how easily she gave it up, and how quiet she was while getting the job done, interjected into an otherwise action-fantasy set of prose. My eyes instantly darted around the room, to the other women at the group. Maybe my eyes were tricking me, but I swore that they were gripping the tables as tightly as I was. (One lady’s eyes were bugging out!)
The feminist in me instantly wanted the rattle my saber, however another thought dawned on me in that moment. I started to question whether or not the sex slave in the story offended me, or if I was having stabs of awkwardness knowing how uncomfortable the other women around be were. (EMPATHY, DAMN YOU!) Is it possible that the other women around me, even a bit, were feeling empathy for me as well, having to read about troped-up violence against women.

Well, the reading was done. We took our turns critiquing the work. A can of worms was open immediately, and I’m betting you can guess exactly how that went down–no need to relive that ball of awkward.
I generally felt bad for the author. A total deer in headlights thing sort of happened. It was his story. He worked hard on it. He liked his characters. He enjoys the tropes. But, there he was, blasted for his scene portraying a woman in a stereotypical debased state. I, however, just don’t know.
I mean, in general, almost nothing bothers me in fiction, so long as the story demands it. I’m not sure if the story called for this scene, 100%, or not. ( I haven’t read his full novel, just that snippet.) But, when it comes to issues of sexual aggression toward women, does it matter if the story calls for it? Are we, as fantasy readers, tired of this story? Should this story still be being written? I am just throwing questions out–I’ve yet to come to my own, concrete, conclusions on the matter.

I wasn’t so much offended by the sex slave scene, having read a ton of trope-licious fantasy all my life. I think I was more thoughtful over what this specific trope meant. I honestly wanted to help the writer with a good critique (he’s a nice guy), and mostly ignored that scene for the rest of the story, which was nicely strung together. But, I couldn’t shake the feeling that there was a greater dialogue going on in this story, than just what was discussed in the group. A discussion on the necessity of the sex slave trope, perhaps. A discussion on violence toward women in fiction, the media, and our culture, maybe. When the lady to my right challenged the writer to try and flip the trope on its head by having her be smarter, craftier, or rise out of her situation, the writer replied that the slave was. You see, the sex slave is preggers with her master’s brother’s baby…that’ll learn him!

I think I literally saw the light in that lady’s eyes die when he said that. He didn’t get it. It was possible (I don’t want to say for certain) that this man, like so many others in fantasy, didn’t understand women…or why having your rapey boyfriend’s brother’s baby was not exactly the triumphant stepping out of your oppression story, like he seemed to think it was. (Queue, Jerry Springer)  For most woman at that table, it seemed like it made the sex slave’s story even more tragic. I hurt for this character. I wanted to reach down into the pages, grab her, melt every man in the writer’s world into a puddle, and take her to a world where she could be the hero (or at least a plucky side-kick with some level of competency…maybe teach her how to read). I wanted to save her from her author! I applaud the writer, however, for inspiring that kind of emotion in the reader, though I’m not sure it was the desired reaction he was going for. But, I don’t really blame him. Like I said, I honestly think he doesn’t know better. He doesn’t know how NOT empowering the scenario he set up is…and it may not be his fault.

The sex slave is a trope, and a trope for a reason. It works. People like it. Men like it. Fiction is a place that is safe for this kind of debasing fantasy–a fantasy other men can relate to. There it is okay for women to either be the old-hag or the sex kitten, without any degrees in between.

**spoiler**
This brings to mind one series I enjoyed. Ed Greenwood’s Dark Lord. He definitely played with the sex slave trope in it. He might have even played too closely to the pathetic side of it than what is to my liking, but he definitely had a good solution to it: the sex slave killed the master…if not with reservations (poor dear).
Despite finally having a sex slave that bites back, and having a book filled with intense 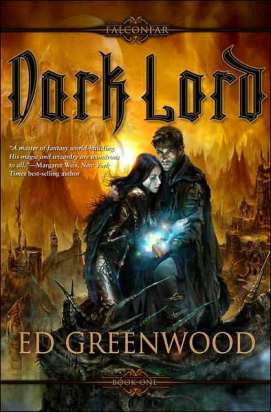 female warriors, I’d like to bring the cover art of the book to mind. Now the cover art, in my opinion, is beautifully done. Expertise! However, notice the body language of the two characters. The male is triumphantly, and protectively, over the female. The female is diminished, cowering in his protective aura. Now, anyone whose read this book is fully aware that the cover should be the opposite! That dude should be ass-up, shielding his delicate writer brains under the woman’s skirt hem, while she bludgeons fifty evil minions with a backhand. (I would like to point out that the cover art for the other books in this series are equally as beautiful, some showing the female protag in very powerful positions. Thank you, Ed!)
So, that brings me to my next question, why couldn’t we have had a cover like that?–where the man needs protecting, and the woman is triumphant, on the same cover? I, again, have no answers, I’m just postulating. I think, if speculative fiction is to thrive, it needs to embrace that an increasingly growing number of its readers are female. It needs to accept this as more and more women start plunging into the, typically male dominated, realm of high fantasy and hard science fiction. I think a great deal of disenfranchising will occur otherwise. If it wasn’t for writers like Robert Jordan who decidedly gave women the whips, and tongues to match it, in his world, I’m not sure I would be writing fantasy today. I might have just conceded that it was all a boy’s world, written for boys, to act like boys, a long time ago.
Thoughts?

6 thoughts on “Women in Fantasy: #1 A Boy and His Sex Slave”